Martin Luther King Day is observed annually on the third Monday of January in the United States, the date closest to King's actual birthday, January 15th, and is the only federal holiday to honor a private citizen.  Martin Luther King Day is not simply a day off from school or work; rather, it is a wonderful opportunity to reflect upon the legacy of a man whose convictions forever changed the course of history.

Who Was Martin Luther King, Jr. ?

“Our lives begin to end the day we become silent about things that matter.”
--Martin Luther King, Jr. Martin Luther King grew up during segregation, a time when African-Americans and whites were not allowed to eat at the same restaurants, go to the same schools, drink from the same water fountains, or use the same restrooms  He attended segregated elementary and high schools in Georgia and graduated from Morehouse College, an all black college in Atlanta.

After meeting and marrying Coretta Scott in Boston while studying theology at Boston University, Martin Luther King moved back to the south to raise his family and join the “family business” as pastor.  It was 1955 and Rosa Parks, an African-American, had refused to give up her seat for a white passenger.  Martin Luther King began his fight for change.  After Rosa Parks was arrested, King called upon the African-American community to boycott the buses.  This boycott lasted nearly a year and in 1956 the U.S. Supreme Court banned segregation on public buses.  King had, along with his followers, set nonviolent protest in motion and the civil rights movement was underway.

“I have a dream that my four little children will one day live in a nation where they will not be judged by the color of their skin but by the content of their character.”

From “I Have A Dream” by Martin Luther King, Jr. Countless sit-in's, protest marches, boycotts and, often, his subsequent arrest followed.  He was arrested more than 23 times during the nonviolent protests he led.  The pinnacle of these was the peaceful march of one quarter million people that King directed on Washington, D.C. in 1963.  And, it was on the Mall, before those followers that Martin Luther King, Jr. delivered his most famous speech, “I Have A Dream.”  He was awarded the Nobel Peace Prize, at the age of thirty-five, one year later in 1964 and remains the youngest recipient of this honor today.

Four short years later, Martin Luther King, Jr was assassinated while standing on the balcony of his motel room in Memphis, Tennessee where he was scheduled to lead a protest march.  He was thirty-nine years old.

How Can You Honor Martin Luther King's Legacy?

"Life's most persistent and urgent question is: What are you doing for others?”
--Martin Luther King, Jr.

A day off is certainly welcome by everyone.  But, what is the best way you can honor the lifework of Martin Luther King, Jr.?  On January 18, 2010, you can join thousands of others for the MLK 2010 Day of Service by volunteering in your community.  There are countless ways you can help!  For more information, please visit: www.serve.gov. 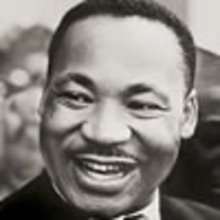