The crane is one of the tallest bird in the world! It is also one of the most famous origami. It comes from Japan, and is traditional, it a symbol of happiness and health. The legend says that if you fold a thousand paper cranes, your wishes will be granted. Those 1000 cranes garland are a worldwide symbol of peace.

How to make a paper crane

Now you are done! You can make a lot more, make a little hole on the back of the crane, and use a string to make a lucky garland! 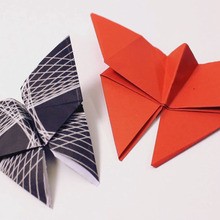